If you are a fan of manga and or horror, chances are that you have heard of the name Ito Junji. He has been praised as one of if not the best horror manga artist ever. And somehow I just got around to reading his most famous work.

A small and isolated Japanese town called Kurôzu-Cho is plagued by something sinister and a high schooler called  Shuichi Saito and his girlfriend  Kirie Goshima seem to be right in the middle of all of it. Saito begins to notice that the mysterious events that occur in their town are because of one thing: 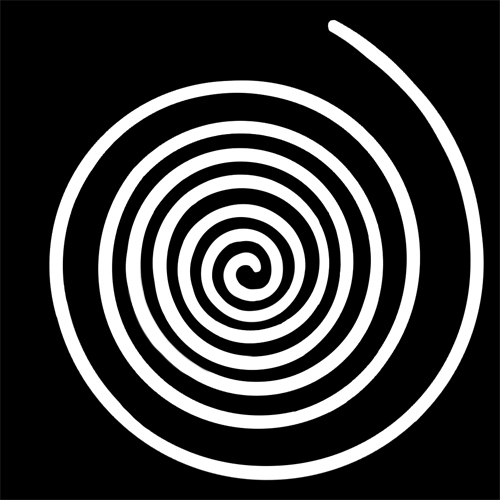 It would appear that anyone that comes into contact with any sort of spiral begins to be affected by it. They either become obsessed with it to a worrying extent or the spiral itself begins to have an effect on them, either physical or mental.

We follow the two high schoolers as they try and survive in the town while everything around them spirals out of control with a bunch of short stories that altogether culminate in a grotesque ending.

Story-wise, there is not much that I can say. Kirie and Saito just go through all of the different and horrific events and move on with their life which can be seen as a bit weird, especially Kirie who seems to just shrug everything off and pretend like nothing happened the other day. But Saito is sort of her opposite. He knows everything that is happening, he knows what is causing it and he is doing his best to get them out of there.

Now at first, the non-linear storyline did throw me off a bit and honestly, I did wonder at times about why this is so praised exactly but it managed to culminate in an absolutely amazing ending so at the end it was worth it.

And even though I felt as if the plot was weak at times the manga itself still managed to spiral me deeper and deeper into it and that is because of the fantastic and horrific art. Junji seems to understand how to make something terrifying and inexplicable and he conveys it in his manga perfectly. Each scene was creepier than the other but you did not want to stop looking at them.

The art was absolutely beautiful and it is worth reading the manga for that alone. It feels as if it is luring you the reader inside the manga. And this is why it is so effective. It offers you a much different feeling. It is the perfect representation of visual horror, the type of visual horror that really gets under your skin because it is something that you definitely have not seen before. Junji’s imagination seems to be amazing and his work definitely deserves the praise that it gets. So even though at first I was not that impressed by the fact that it does not have much of a plot, after finishing it I understood why that is and what his stories represent.

Luckily, there seems to be great news for fans of the manga, it will be animated by adult swim, and judging by the trailer it will definitely not disappoint:

It definitely is not my favorite type of horror but it is a type of horror that I can greatly appreciate. Ito is a master of his craft and I will definitely be reading more of his work. He also seems like a cool guy:

It’s funny that he reacted to videos that I’ve also seen and talked about too: