A voice started echoing through the forest. Samantha was screaming as loud as she could. She’d had enough and was just itching to take her frustration out on something. This was her third time trying to run away from home. Her parents had arranged a marriage for her with Matthias, a local boy from the village. Matthias came from a rich family, and in retrospect, maybe her parents did not mean her any harm but to her, they were stealing her freedom and any hope of a happy and fulfilled life.

A life of a housewife with no future to her was hell and she knew that she had to get out of there. Life is not the same anymore, there is more than tradition and just slaving away in her husband’s house tending to their children and she knew it.

Thanks to the internet she was able to see that there was more to life than just being a housewife to a spoiled little brat. The world was full of all sorts of wonders and people. She even made friends from across the world. Compared to the things that she saw, her mundane life seemed more like imprisonment.

Her life was not completely horrible though. As much as she hated her parents’ decision she still loved them, but the arranged marriage was her breaking point. She had to get out and see the world at least for a while, experience something that she could remember. She felt as if she was being suffocated and forced into a life of slavery, being reduced to an object or tool rather than a person. An ignorant, meaningless life where you just do nothing else but exist.

She never knew how that lifestyle could be appealing to some, but then again she knew that if she stayed there she would be forced to assimilate and accept it as well. Her mother suffered the same fate which was awaiting her, at an even younger age. She couldn’t really blame them, how could they know better? Back then, the only thing they knew about the rest of the world was the stories people told, and all stories can be twisted, some intentionally, some not.

She already saw that in action. It’s crazy how a person can turn a story around just so it fits their narrative and doesn’t burst their little bubble. Some even do it subconsciously. A life like that scared her more than even death. She made sure she’d have that as an option too, taking the kitchen knife as she snuck out of her house as soon as her parents fell asleep.

After running for what seemed ages, she decided to take a break under a bridge. The exhaustion caught up to her and she was asleep before she knew it, sinking deep into the abyss inside of her dreams.

Her dreams were her safe haven. In her most frequent dream, she would be floating inside a dark abyss where she felt at peace. However, this time it was different. She could make out a figure at the corner of her eye, coming closer and closer while she just stayed in the same place. Whatever it was, it was coming towards her at a very fast pace. Suddenly she felt as if she was being drowned. All her senses were getting dull and she was losing her breath. Something was grabbing her neck and was squeezing it with great force.

Luckily, she snapped out of it before the pain became unbearable. There was soothing voice singing in the distance. She quickly composed herself and tried to find the source. She climbed back onto the road and noticed a silhouette of a person on the bridge.

There was a person in the distance. She was stunning. A young redhead with a perfect figure was standing in front of her singing some song in a foreign language. Even though Samantha had no idea what she was singing, she was sure that she knew the exact meaning of it.

Before she knew it, she found herself right in front of her, completely captivated by her charm. For a split second, she thought that the woman’s eyes were pitch black but she did not have any time to react. Once she had a good look at her she noticed that her eyes were completely dark, but she did not have time to react. The mysterious woman put her hands around her and kissed her passionately.

A wave of emotions hit her like a truck but before she could come to her senses, but she was gone. Her entire perspective on life changed after that. She never knew that a girl could make her feel like… that. She tried running after her but there was no trace of her.

Running around the forest, Samantha found herself in a part of it which she did not recognize. Having grown up close to it she thought that she knew every nook and cranny. But something about this part of the forest was off. For one thing, it was far too quiet. The sound of the river disappeared alongside any sign of wildlife. No birds chirping, no insects buzzing, nothing. The forest was slowly becoming dull and desolate, robbed from any sort of vigor and life. The sun was coming up but you could hardly tell. 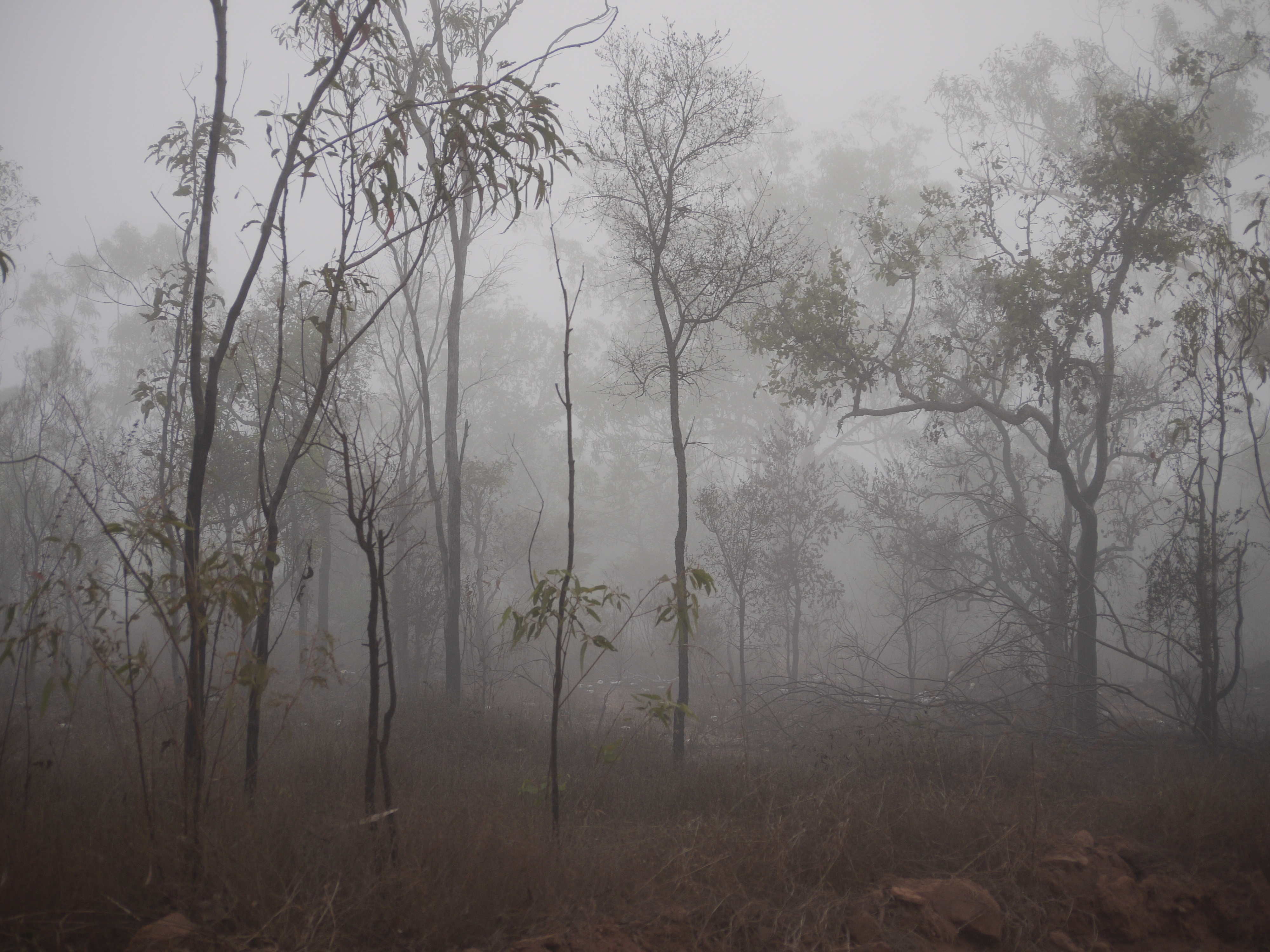 The uneasiness started to slowly creep up on her. She started feeling a faint presence in the distance. As if someone was following her. She could feel the eyes on her, an evil stare looking down upon her, waiting for her to show any sign of weakness. At first, she thought her parents had caught up with her.

The forest was getting darker and darker. The night was approaching. Her breathing was becoming so heavy and loud that she would be heard from a mile away. She was beginning to hear branches breaking and the footsteps were getting closer. Someone or something was near.

“Samantha.” – she heard a whisper, but there was no one around.

Panic ensued as she started frantically turning around to find the person.

Suddenly the hairs on her body started going up. There was something slithering along her foot. It was slowly creeping up to her. Her state was becoming maniacal as she frantically tried to chase it away. It was a snake. A small green snake and it was somehow speaking to her.

“They are coming for you, Samantha!”

Samantha was terrified at the sight before her, but she had no time to comprehend whatever was happening, grabbing it and immediately crushing it with a stone. She did not even notice that the snake did not even bleed, as if it was a shell of something.

What exactly was going on around here? She struggled to find an answer but to no avail. Hoping to find out where she was, she started to climb a tree to get a better view of the area.

The forest extended as far as the eye can see. It was a gorgeous sight which she could not enjoy since she was busy panicking. It was as if she was in an entirely different area and she had no idea what to do. But, she did like that a bit. It was something new, something different for her to experience for the first time ever in her life. However, something stopped her train of thought.

A familiar voice appeared. It was her mother, or at least what sounded like her but it looked almost nothing like her. “Come down and join me, dear. You are destined for great things. Now, come. She awaits.”

The tone of her voice started changing. It went from the soothing voice that she was used to, to something darker and much more disturbing.

“Come now, Samantha! You don’t want to make me angry!”

The figure rose from its horse and began levitating towards her. Scared for her life Samantha started to panic, trying to move up the tree. However, she managed to slip and fall, landing right on her head and knocking herself out.

She came to her senses after hearing a soft, melodic voice. A group of gorgeous women dancing and singing in harmony was surrounding her.

She rejoiced at the sight of them, especially since the woman which she was seeking was among them, but the joy quickly faded from her face. She noticed that she was gagged and tied up to the chair.

A moment later the women stopped singing and approached her. One of them started speaking.

“Did you know that snakes appear in many mythologies throughout the ages? In many of them, they can be seen as deities and protectors, and yet at this day and age, most of us run away when we see them as we associate them with evil and danger. Luckily for us, you managed to take out that little slithering fool who tried to warn you.”

“She doesn’t need to know all of that Maude. Let’s just gut her like the little piggy that she is.”

“Now, now Evelyn. You know better than that. After all, we do need her hope before we get rid of her. It has to be done carefully.”

The woman she saw on the bridge earlier approached her.

“Hello, darling. Remember me? I am so glad that you could make it to our little meeting. We needed a young little bird like you. And what do you know you managed to land right in front of our feet.”

She caressed her hair and gave her a seemingly loving glance but Samantha noticed that she was holding a dagger in her other hand.

“Such a shame, in another life we could have had something wonderful, but oh well.”

She sat in Samantha’s lap and gave her another kiss.

“Don’t worry, I’ll give you the freedom that you yearned for, for such a long time.” – She whispered in her ear just before slicing her throat and collecting her blood in a bowl covered in strange symbols.

“We offer thee a sacrifice, mother! With this blood and this magic herb, we seek that you accept us in your loving arms.”

A mysterious figure showed up from behind them. It was the same figure as the one which approached Samantha earlier. It held out its hand and presented them with an otherworldly looking flower which had colors never seen before. The women threw it in the bowl and passed it around the room so that everyone could taste it.

As soon as they swallowed it they started letting out screams of unimaginable pain. Their bodies started to change and contort in a grotesque manner. But they loved the pain, it was almost orgasmic to them. They started to experience a vision of an enormous tree covered in blood and a gorgeous young woman calling out to them, but it only lasted for a second. Suddenly, everything stopped as the women started to catch their breath. 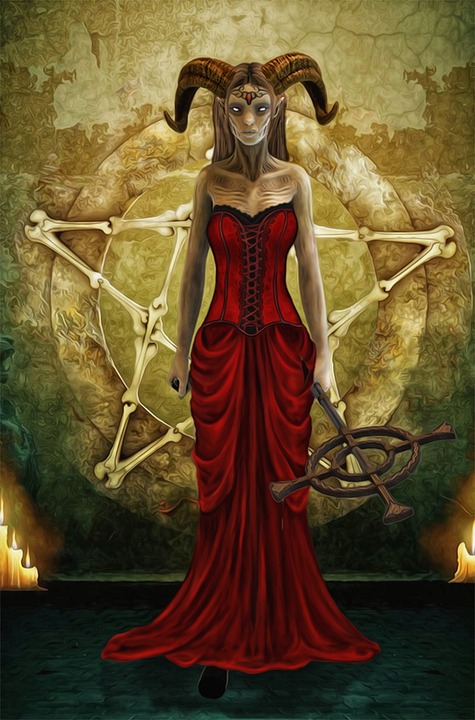 “It’s real! I knew it! I’ll stop at nothing to reach that place now! Onward, let us move on with the ritual.”