Things that made me love the horror genre: Half-life

Young Nightmares heard a lot about Counter-Strike, so his dad decided to get it for him, while at it, he brought him Half-Life as well. And lo and behold, he ended up loving it.

For those who do not know, Half-Life is a first-person shooting game developed by Valve. A few days ago, I saw the entire Valve collection of games 95% off on steam (yes you read that right 95% off) and it was impossible to resist. It was time to play it again after so long.

You play as Gordon Freeman, our protagonist with few words, a physicist who starts working at the Black Mesa research facility. Once there, he pushes an odd and mysterious object into an anti-mass spectrometer for analysis, the spectrometer explodes causing a chain reaction which opens up a portal into another dimension, to a world called Xen.

Surviving the blast, Gordon tries to escape the facility, battling otherworldly creatures which came from Xen as well as marines (also known as the Hazardous Environment Combat Unit HECU). The arrival of the marines, as well as the fact that communications are cut, make things very shady. Left all alone, Gordon must fight through all of them to get free and escape Black Mesa.

Even though the game can be seen as outdated, it is still such a blast. It can get a bit tilting at times but that is a part of the fun. There is so much to do, and the campaign is long with a lot of content and versatility, it’s totally easy to see why it was called the game of the year by over 50 publications.

Even though today, it really does not creep me out nearly as much as it used to before, I still remember many scenes vividly and playing through them again was pretty interesting. For example, this scene: 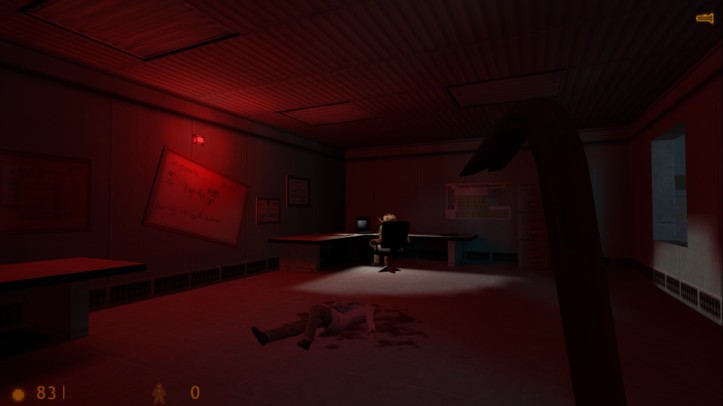 Coming across a headcrab for the first time in a dimly lit room like this was quite the experience, I did not really know what I was in for and seeing this really scared me. And yet I still continued. Something about all of those otherworldly creatures really intrigued me and I had to move on. The curiosity of a child is quite strong.

And, we can’t forget what may be the creepiest part of the game. Not the monsters but this fellow right here.

Now, of course, the storyline is not that groundbreaking but the wonderful thing about it is the way in which it is told. It is not spoon-fed to you, instead, you have to dig deep and solve a lot of puzzles and shoot your way through to get the answers. The balance of action, suspense, horror and logic are done perfectly and it makes the game constantly feel fresh. Especially the aspect of the G-man himself who seems so minor and yet ads so much flavor.

But the game is not really perfect. Replaying it I could see some things that somewhat took away from my experience but it was nothing worth comparing to the rest of the game. Even if they were too noticeable I would hardly mind them. Half-Life was a way too influential game from my childhood. A perfect blend of action, horror, suspense, and platformer types of gameplay.

Thinking about it lately, I am fairly certain that it had a hand in my love of the Lovecraftian world as well, especially considering that one of the writers who worked on the game said it himself:

The Lovecraftian influence is buried pretty deep in Half-Life—perhaps you can spot it in the sense we try to create of mankind being a tiny speck in a vast cosmos. The most Lovecraftian passage is probably Dr. Breen’s speech at the end of Half-Life 2 when he is trying to entice Eli with glimpses of the wonders he has been shown by the Combine. This sort of teasing view of things beyond imagining is one of Lovecraft’s techniques, on display most clearly in “The Whisperer in Darkness.” (From his interview)

But I think there is something else that alludes to the Lovecraftian world and that is the G-man himself. One could definitely argue that he can be none other than Nyarlathotep.

Many years later, despite some frustrations through the game, Half-Life is still to this day very enjoyable and viable. Definitely still one of my favorite games.