The cabinet of Dr. Caligari – why it still holds up even today

One of the most iconic and well known silent films – The cabinet of Dr. Caligari is still one of my favorite movies ever.

People often forget silent and black and white movies while talking about the best or scariest horror films. Which is a shame because there are so many gems that come from that era. The most notable is of course The cabinet of Dr. Caligari which was directed by Robert Wiene and written by Hans Janowitz and Carl Mayer. It is an iconic and very influential film which has influenced and inspired movies and filmmakers like the 1920s horror “Metropolis”,  Tim Burton, “Citizen Kane” and more. It is safe to say that movies today would not be what they are without this film.

We see our main character – Francis as he sits down with a man. He begins to tell his odd and unbelievable story which takes place in a town called Holstenwall. We see an odd figure as he tries to get a permit in order to be able to showcase his somnambulist from a clerk who at first starts mocking him but ends up still giving him the permit.Francis and his friend Alan visit the spectacle. At the event the doctor showcases his infamous somnambulist Cesare who has been asleep for 23 years. He tells the audience that he can see all – past present and future and that he can answer any question. Alan steps forward and asks him “How long will I live?” to which Cesare replies “Until dawn”. Later that day a mysterious figure breaks into Alan’s house and murders him. Francis, greatly saddened by the news decides to investigate his death. This and the death of the town clerk start to create a panic in the town and it’s inhabitants.

I’ve watched this film a couple of times now and yet I never get bored of seeing the gorgeous aesthetic that offers. It is one of the most iconic and influential movies of it’s era and you could say the father of psychological horror as we know it today. Reading into it further fascinated me with the film even more. Both of the writers were pacifists and were greatly affected by the war psychologically. Mayer even pretended to be mad in order to escape service. This brought him to a military psychologist who would end up serving as the model for Dr. Caligari. This psychologist would also increase Mayer’s distrust of authority. In 1947 a film critic named Siegfried Kracauer made an observation saying “Caligari exposes the soul wavering between tyranny and chaos, and facing a desperate situation: any escape from tyranny seems to throw it into a state of utter confusion, quite logically the film spreads an all-pervading atmosphere of horror”. And even though the doctor himself is the main symbol of this, he himself is also a victim of authority as we see in the beginning with the clerk. The film was also described as Germany’s obedience to authority and failure to rebel against said authority. Janowitz and Mayer are said to have set out to write a story denouncing arbitrary authority as brutal and insane but the set designer of the film said that there were no political themes in the creation of the film. Critics have also said that Caligari and Cesare were premonitions for the rise of Hitler and his control over the will of the weak. Even the art of everyday life in the film is portrayed in a way which shows the people with power in a higher place than the common folk. 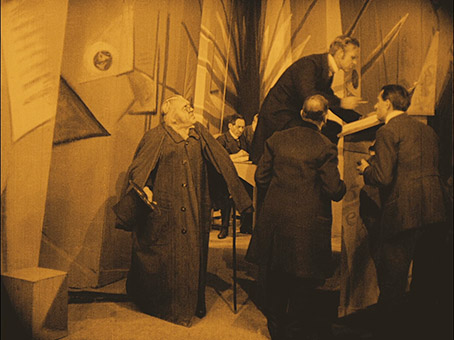 (the clerk sitting in a very high chair as Dr. Caligari comes to get his permit)

Another example of this are the multiple staircases that lead to the doors of the insane asylum and the police headquarters.

There are a lot of themes that are worth analyzing other than this one too: The perception of reality, insanity, duality, love and more but I want to focus on the horror aspect of the film.

Firstly the visuals. The cabinet of Dr. Caligari has one of the most unique and gorgeous set designs you could find in a movie, especially a movie from that time.

They make for a very eerie and creepy twisted and very bizarre environment. The forms and shapes are very sharp and curvy lines which logically shouldn’t even be able to be standing up without breaking down but in this twisted world they seem to work.  It almost looks like it is alive and moving. This sort of architecture really makes the viewer feel uneasy. Twisted, dark and distorted and full of fear and disturbing imagery. It can be seen as a nightmare. It is a hauntingly gorgeous set that makes even the modern viewer very anxious while watching.

Another amazing part of the film is definitely the music. There is something magical about the combination of the music and scenery in the film. It makes everything that much more terrifying. There have been a couple of musical scores to this film.

The Club Foot Orchestra premiered a score penned by ensemble founder and artistic director Richard Marriott in 1987. In 2000, the Israeli Electronica group TaaPet made several live performances of their soundtrack for the film around Israel. Bertelsmann/BMG commissioned Timothy Brock to adapt his 1996 score for string orchestra for the 2014 restoration; Brock conducted the premiere in Brussels on 15 September 2014. In 2012, the Chatterbox Audio Theatre recorded a live soundtrack, including dialogue, sound effects and music for Caligari, which was released on YouTube on 30 October 2013. (info from wikipedia).

The creepiest part of the movie however for me was the acting. There were so many memorable performances in the film. The most notable of which was Werner Krauss as the doctor. His facial impressions alone can give people chills. Good acting was especially needed in the silent era. With no words and sounds to display one’s emotions and the cast does this perfectly. True it can be seen a bit as overacting but in my opinion that is done intentionally to fit the tone of the film.

And of course we have the end. An end that keeps the viewer questioning the sanity of the characters in the movie. It gives you a fantastic plot twist. Or does it? It is an ending that definitely can be interpreted in a couple of ways. Definitely one of my favorite endings in movies. Wonderfully scripted and it gives you many questions unanswered. It is clear to see why this movie is so highly praised and any fan of cinema (not just horror) should check it out. It is an old and dated film yes but it can still easily measure up to most to the movies today in terms of creepiness and complexity.